November 5th - Saturday - Notes recap and board pics from Friday

This is the re-cap note that went home today. Board pics are attached. It was a book-work assignment on Friday that gave students a review of organelles. ...

Recap of the notes / concepts for Week #12 (Thursday and Friday)

We’ve referred to this science class as a history class, sometimes, because we go from the BIG BANG, the very beginning of our universe (almost 14 billion years ago) to now. The first nine weeks of science covered the FUNDAMENTAL FORCES of nature (STRONG, WEAK, ELECTROMAGNETISM, and GRAVITY.) How previous generations of STARS (Stars before our own sun even existed) made larger ELEMENTS from Hydrogen through NUCLEAR FUSION. How our SOLAR SYSTEM formed and, of the eight planets, several minor planets, and dozens of moons - EARTH is, so far, the only place in the universe that we know has LIFE!

We compared and contrasted MARS and EARTH and our list of the properties that make EARTH ideal for life including:

As we move forward into Week #13, we’re learning the parts of cells - THE ORGANELLES _ and how they arose  (EVOLVED) to their present forms and how EVOLUTION is the driving force behind the DIVERSITY of life on Earth.

Few things are more amazing than the story of NATURAL SELECTION and, as we go forward to learn the mechanism of EVOLUTION, we understand how unique and special EARTH is and our human impact on this “one place, we call, “Home.” 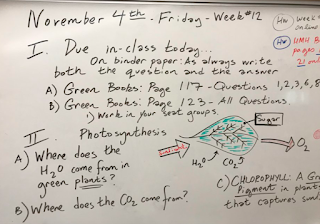 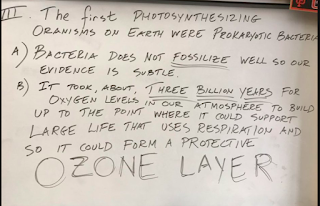